This week I may have baked myself into oblivion. Following my muffin experiment I wanted to explore a country that I am still yet to visit, Austria. (which I am assured is not in Germany and Prussia no longer exists). We went to our friends’ beautiful wedding last weekend where I was kindly given a boatload of homegrown apples. Congratulations and thank you James and Lara they are very tasty! This is my second bake using said apples. 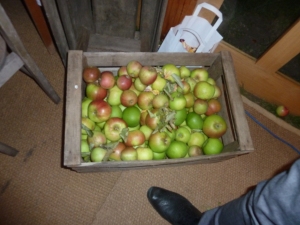 I wanted to find an authentic recipe for something a bit more challenging, stepping up the baking ante. I chose a rather traditional Viennese Apple Strudel Recipe. This involved an enormous amount of apples and butter and yet another pastry effort.

Peeling and chopping a mountain of apples and simultaneously sauteing my previous homemade baguettes in butter I got stuck in. 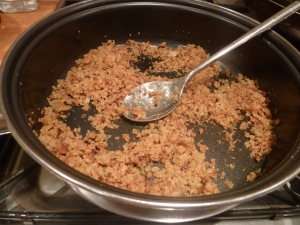 The pastry was epic! My poor little electric whisk started to smell like the blown out birthday candles and I fear it will never be the same again. There’s pastry still trapped inside, even after a took a knife to it, to coax it out!

The recipe called for a 4 foot length of cloth to stretch the 4 feet of pastry out on. I’m not even sure my workbench is 4 foot long?! With limited resources yet again I found a subsitiute for cotton, in cling film. (I don’t think this is the traditional method in Austria,) Selotaping vast amounts of cling film to the bench seemed to be my best bet. I felt like the Cling Film Queen. Christening my new fabuolous rolling pin, I set to work flattening it all out and stretching the pastry to within an inch of it’s life. 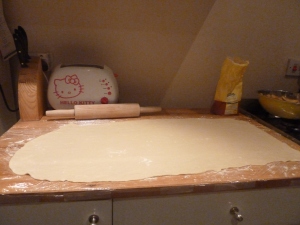 Then to add the filling and breadcrumbs quickly before the pastry fell apart. It was very delicate. I had to coat the inside in even more butter, in addition to the extra chunks of butter the recipe requested to accompany the apples and raisins! I hope my guests like butter…

I thought the next bit would be really difficult, folding the pastry over to roll it all up. I was very proud of myself when I got to this point. Who needs 4 feet of cloth to wrap up a strudel?! I thought whimsically. It wasn’t easy, I hasten to add, as the cling film kept tearing but what was still yet to come almost had me in tears…

Roll Up! Roll Up!

Entering in to my second hour of preparation I was getting to that almost frazzled point and needed some stroke of genius to enlighten me as to how I was going to a) get this 4 foot pastry monster out of the cling film and b) on to my quite small baking tray.

I made sure this time I greased the paper very well! But every little attempt to move the strudel made the corners of the apple chunks inside poke through the pastry. Patting down the increasingly thin pastry I went for the Band Aid Method, throw it into the tray and rip off the cling film. I was up to my elbows in butter by this point. Hallelujah! It was on the tray in a Horseshoe shape. Phew!

Now you may notice the obvious mistake here. Despite having the recipe printed out in front of me (without any photos) I still managed to misread it! This is getting beyond a joke. Is my eyesight or my brain failing me? I may have to start wearing my glasses whilst baking. The recipe prescribed half of the bread crumbs to be put into the mix which I successfully did. Then in all the excitement of rolling it up, I thought it said to sprinkle the rest on the strudel. I realised, to my horror, after I sprinkled them all over the final product I had missed a step. The recipe said to put them inside the strudel just before rolling. Damn!! I had a good giggle at my stupidity though. It wasn’t life or death, but I was worried the breadcrumbs would burn and smell like burnt toast.

Thankfully it was ok in the end! It smelled quite lovely, but as it was now 11pm I wasn’t in the mood for sampling it. Also we had friends coming over the following evening for food so I wanted to save it for them.

No smell of burnt toast at all 🙂

A quick reheat in the oven and lashings of custard and the strudel was a success! 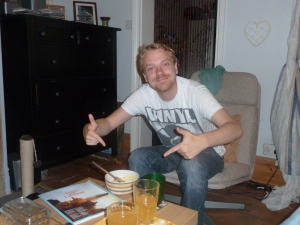 It was well received

The sweet apples and raisins contrasted nicely with the savoury pastry. It should also feed the 5 thousand as it’s enormous. 4 of us hardly put a dent in it! Please send tupperware, or even bring a plate and you can have a slice!

I may have now reached my pastry capacity now. I may explode. Next bake will have to be something a little different I think…

There was an error retrieving images from Instagram. An attempt will be remade in a few minutes.