I’ve heard pretty good things about soda bread but never have I attempted to make it myself. I discovered a recipe from Ballymaloe House in Ireland, in my food processor cookbook that appeared to be very straight forward. Promising to only require 10 minutes preparation and 40 minutes cooking! I took on the 10 minute soda bread challenge and set to work.

This was actually very quick and dare I say it… Easy to bake! With very little kneading or washing up required. Hurrah!!

I literally whacked everything in the food processor…

… and set it to high for a couple of minutes using the dough hook attachment. You could use a bowl and a spoon or even just your hands to combine it all together into a runny, floury mixture.

Once it all comes together the challenge is to remove the sticky mess from the bowl in one swoop and not get coated in runny flour mess. I failed on this count and had to deploy a spatula to encourage the mix out of the bowl.

I tipped it out onto a lightly floured surface (also known as my glass worktop protector thing). Adding more plain flour to the board until I could bring the dough together without it adhering to my hands.

Once it starts to take shape all it needs is some encouragement, folding and lightly kneading the edges into the middle to form a round dough shape about 4 cm deep.

I greased and floured a flat baking sheet and plopped the smooth circle of dough (folded edge down) onto the sheet.

Challenge complete in less than 10 minutes!! Taking my sharpest knife I cut a shallow cross into the top of the loaf and teased the edges out slightly so the cross was more defined. The cross helps the heat penetrate the loaf and cook evenly throughout. Irish folklore also says that that the cross lets the evil spirits out. Good to know.

Into the oven it went for 10 minutes at 230 degrees c. (gas mark 8). While the oven was heating up I popped a roasting pan in the bottom to get really hot. Then just before shutting the oven door I threw a cup of cold water into the pan to create some steam and a soft crust on the bread. Perfect! (I love this tip – thank you Holly Bell)

After 10 minutes I turned the oven down to 200degrees C (gas mark6) and baked for 30 more minutes until the crust was golden brown and the loaf sounded hollow when tapped on the bottom.

What a result!! I was astounded that a yeast free bread rose so much! It doubled in size and didn’t need any proving or strenuous kneading either! Amazing result for so little effort. It smelt amazing and tasted a bit like a cake too. What could be better than a bread/cake hybrid?! 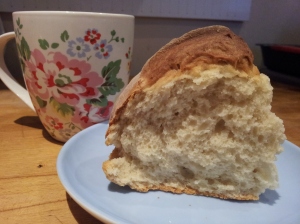 One hunk of Soda Bread

We ate this for breakfast one weekend and I loved it. I could happily eat it without any butter as it’s so moist, but I did put nutella on it (it was Saturday after all). This loaf should serve 4 and is best eaten fresh which is a good thing as I devoured a quarter of the loaf chunk in one sitting. 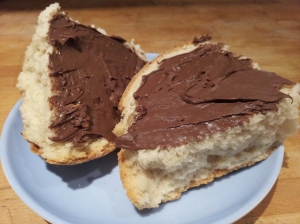 with lashings of Nutella?

I loved it so much I made it again however I was obviously a bit complacent after my initial success. I used plain yoghurt which wasn’t active but a little past it’s best, assuming this would mean it had grown some cultures. I guessed wrong as this time it didn’t expand as impressively and I was a little disappointed by its lack of height. I will be baking it again but following the recipe properly next time! If you haven’t baked it before I really recommend it! And please let me know how you get on!

<!– Include ONCE for ALL buttons in the page –>

<!– Customize and include for EACH button in the page –> <a href=”http://pinterest.com/pin/create/button/?url=http%3A%2F%2Fprinceproductions.wordpress.com&amp;description=Around%20the%20World%20in%20Eighty%20Bakes%20“>Pin It</a>