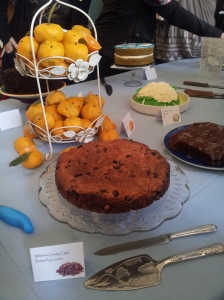 Lard in a cake? Sounds vile doesn’t it? I’ve always been perplexed by this notion of animal fat in food. Long gone are the days when we made Yorkshire Pudding with blisteringly hot fat and yet we still use butter and such like in all our cakes which I guess is a tad more appealing than pork blubber. 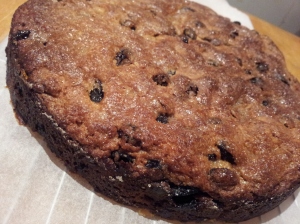 I purchased a pack of lard to bake some Chinese cakes but never found the right occasion to bake the Lardy beauties. I was greatly amused in my favourite Chinese Bakery to see little signs in front of some of the buns proclaiming “I contain lard”. Like they were sharing a guilty secret with us. This was another case of serendipity,  me having the perfect random ingredients required to bake something unusual for a very special EAT Festival Clandestine Cake Club.

The theme was 18th century cakes. (It’s harder than you would think to find a genuine 18th century recipe online.) A bit of research/googling later I realised in the 18th cake was spicy (the spice trade was blooming) and mainly contained readily available ingredients such as Lard and yeast!

I reverted back to good old Marguerite Patten and found Wiltshire Lardy cake. A very traditional English recipe. (I realise I’ve baked A LOT already from England but I promise to be more exotic again soon.)

Marguerite instructed me on making a basic yeast dough. I could tell how authentic (and genuinely old this recipe is as it uses the measurement ‘gill’ I have never heard of this before and it took a bit of deciphering!)

Now attempting to follow a recipe and instructions located in 3 different sections of a book is sure fire way to get me to make mistakes. I did not fail. Was it the late night baking efforts or my recipe coordination skills that are lacking?! Probably a bit of both!

The Food Processor did a wonderful job of distributing the yeast and rubbing the butter into the flour. Saved me a job!

The recipe instructed me to make a yeast paste. I ignored this as I know dried instant yeast doesn’t need to be mixed with liquid first. If I was using fresh yeast (which is a bit more difficult to find these days and more tricky to encourage) I would have followed the recipe to the letter, using blood temperature water and whatnot. With the instant yeast all you need to do is chuck it in with the flour and give it a stir to distribute it throughout. Simple. 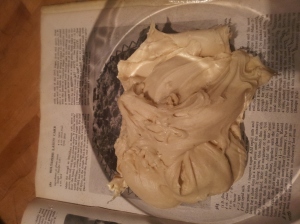 After creating the basic yeast dough and leaving it to prove I fully embraced the lard. The technique required is very pastry like and it requires a little planning and preparation.

Pastry is not my strong point I’m unashamed to admit. I’ve only tried to make flaky pastry once and I shed a few tears over the sheer effort and complicated origami folding required. It was distinctly lacking in flakes too after all the hard work!!

To start with the dough needs to be knocked back and kneaded gently to distribute the yeast and warmth again. Then on a floured board it needs a good flattening with the rolling pin. Roll it into a rectangle.

Rectangular Rolling and dotting of LARD

Then to dot dollops of lard all over, (but leaving the final third empty)! I was in the throes on smearing the distinctly stinky lard in dots onto my flattened dough and crazily folding it into envelope shapes when Super Hans (the cat) joined me wailing for a bit of lard.

Seal the edges with the rolling pin

Roll it out and repeat! 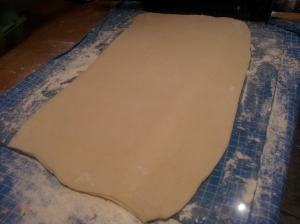 Turn clockwise and roll into rectangle 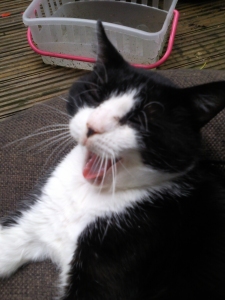 Super Hans the noisy Cat. He enjoys a nice bit of lard.

I merrily proceeded to fold the dough up as required and smeared all the lard into it, then returned to the Lardy Cake recipe to discover I was supposed to have folded the fruit and spices into the dough along with the lard! Damn. Back to the rolling pin and floured board for me to fold in the remaining ingredients. My Lardy dough had a very through folding and rolling! It is a bit more difficult to roll dough when it has dried fruit sandwiched in it, but don’t despair if a few raisins pop through. I think it gives it character.

Folding (again) this time WITH the sugar, fruit and spices! 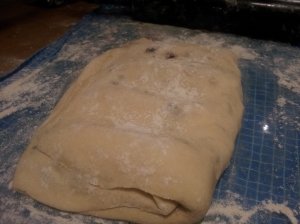 Folded and ready to be rolled with fruit, sugar and spices

Rolled out and ready to be folded again

Second half of the fruit and sugar and yet more folding!

Another fold (don’t worry the fruit is going to peek out in places!)

This Lardy cake definitely has ‘character!’

I was very lucky that my friends Jill and Jonny brought me back some amazing spices from their Indian Honeymoon including some cinnamon bark, which I whizzed up in my spice mill on my food processor. It smells AMAZING, much fresher then my normal ground cinnamon. I added rather a lot of my Indian spices to the sugar mix.

Once I had folded everything into the dough, it needed to be shaped and coaxed by hand into a chunky square. I plonked the square dough into a round, greased and floured cake tin. Then to squash the dough into a round, ensuring there are no gaps along the edges or on the base of the dough to avoid any holes in the cake. It needed a bit more time to prove and then into the oven! 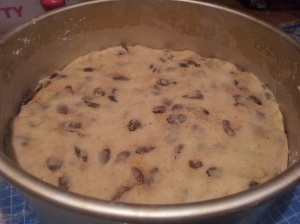 While it was baking away I prepared my glaze to pour over the cake as soon as it came out of the oven.

I was very nervous taking this cake along to the Clandestine Cake Club as it wasn’t as pretty as the other 18c cakes, which included a Wedgewood Iced Pepper Cake (beautiful!!), a basket of oranges! (marzipan encased chocolate and ganache cakes! So very realistic!) and I brought along LARD!? I made sure I sampled my cake first in case it was horrid and I needed to remove it from the table. But I was very pleasantly surprised. 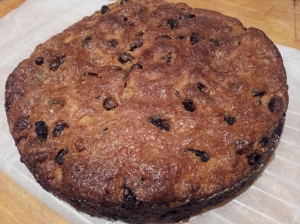 It actually tastes rather nice. It’s a distinctly brown cake. The sugar glaze adds a nice crunchy texture and the lard (dare I say it) gives the cake a slightly savoury feel, a little bit like the Herman the German Cake. I couldn’t see any layers despite all the meticulous folding but perhaps I messed that up with my accidental double folding and rolling. I’m not entirely sure it’s supposed to result in layers either! Marguerite doesn’t really go into that much detail. 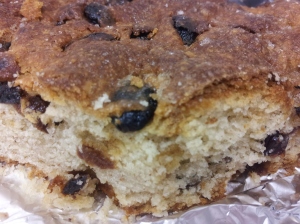 But as you may realise by now I am a sucker for a fruit cake and this ticks all my boxes, fruity, spicy, sugary. It’s always the way isn’t it? The things that are the least healthy, taste the best!

The Clandestine Cake Club was held in the Alderman’s House, which is absolutely beautiful. I’ve walked past so many times and it is only open on special occasions. It was perfect for our 18th century cake feast. As it was part of the EAT Festival we had additional guests to entertain with our cakes. It was a fabulous atmosphere with lots of tea flowing, cake demonstrations and sugar craft too. I’m looking forward to our next meeting in August. 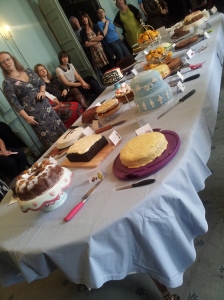