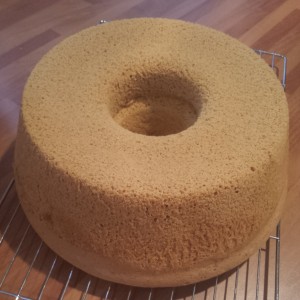 Searching for a suitably exotic and challenging recipe I remembered a wonderful recipe I was given by a fellow cake clubber. Her family recipe for Pandan Cake.  Not to be confused with Panda cake. Although a Panda Pandan Cake would be immense. 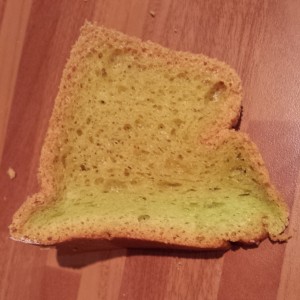 The Great Reveal! (Probably not the best photo that I could have got of the delicate Pandan Chiffon Cake but it shows how brightly coloured it is on the inside!)

Pandan is a traditional flavouring used in South East Asia. (You might find Pandan Cake in Indonesia, Malaysia and Singapore.) It comes from the leaves of the Pandan plant. It is also used to help flavour dishes such as jasmine sticky rice.  If you can get a hold of some Pandan leaves you can make your own extract by boiling the leaves in a small amount of water. Pandan cake is usually green because of the chlorophyll from the leaves  but as the leaves aren’t readily available everywhere most Pandan essences contain some bright food colouring to help recreate the glorious green sponge at home. 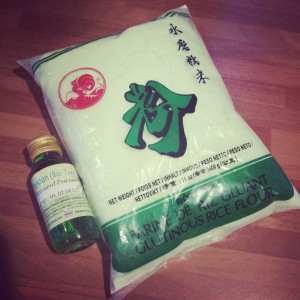 In search for Pandan paste I found Pandan essence and Pandanus Glutinous Rice flour which contained the elusive Pandan extract.  As rice flour behaves in a slightly different way to normal plain flour I had to modify my recipe to accommodate the changes. You don’t have to use the green flour if you can’t find it. You can use self raising or plain. But if you prefer gluten free go for rice flour.  Glutinous rice flour (despite it’s name) is gluten free. The glutinous bit means the rice belongs to the sticky rice family. 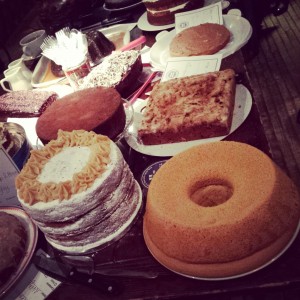 Now upon extra research I realised that this is a chiffon cake. Those Great British Bake off fans will remember this as one of the technical challenges that was a bit tricky to bake! And considering my oven’s unpredictability this may not be the best choice to bake for our first Clandestine Cake Club gathering of 2014. But I do like a challenge! 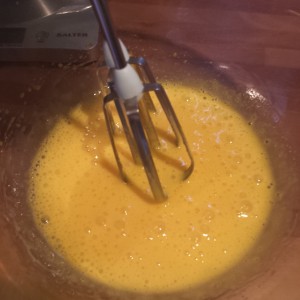 Whisk 8 eggs yolks with the sugar

This has a lot of eggs in it so you will need 2 big bowls but doesn’t take as long to make as you might think. (Only if you stop to take photos along the way does this take a long time! ). Whisk 8 egg yolks with 100g of sugar until light and fluffy 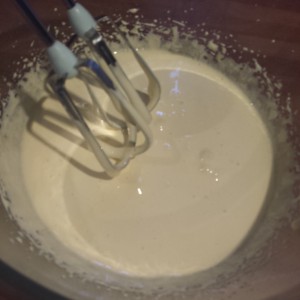 Whisk in the coconut milk and oil

Whisk in the coconut milk along with the pandan essence/paste/extract.  If you’re worried it’s not going to be green enough add a dot of green food colouring gel.  It will soon become a frothy fluid batter with a green tinge to it. 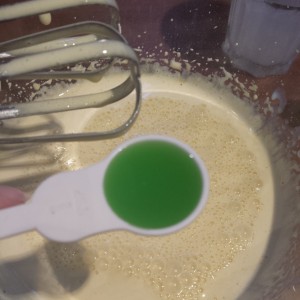 Sift in the flour ( whatever type you prefer) along with the baking powder and bicarbonate of soda.  If using self raising flour you will not need as much raising agent.  Whisk a third of the flour into the batter followed by a third of the oil. Repeat until it’s all combined. 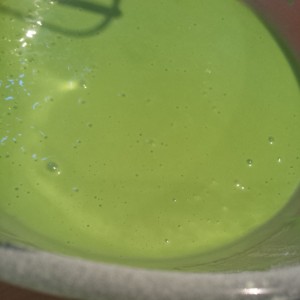 Whisking in the glutinous rice flour – How bright is the batter!

Whisk the egg whites until frothy. Then gradually add 100g of sugar and continue to whisk on high until stiff peaks form. 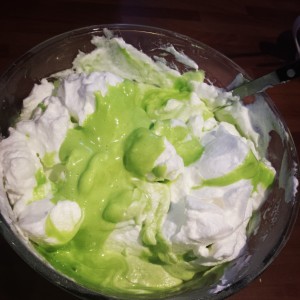 Carefully fold in the egg whites – Love how green the batter is!

As uncomfortable as this seems (it screams against all baking experience)  pour the mix into a NON GREASED tube pan (looks like a flat topped Bundt tin). Apparently chiffon cakes need to cool upside down and grip the sides of the tin so they slowly slide out of the tin as they cool. If removed straight away the cake will concertina up and end up as a dense pancake.  Greasing the tin would make the cake slip out too quickly so try not to grease it 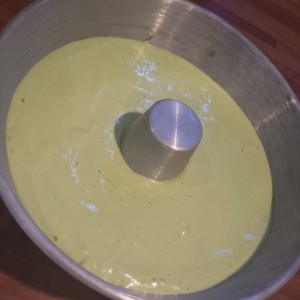 Now with all that wonderful air in the cake the sponge springs up magnificently in the oven almost escaping the tin. With the hole in the middle the cake will cook quicker and more evenly which can only be a bonus in my oven. 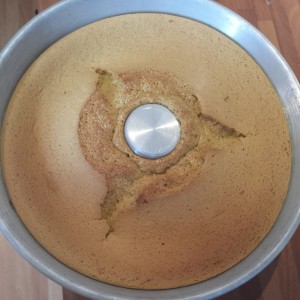 You will need to keep an eye on the cake to make sure it doesn’t burn.  Bake it for 50 mins at 160 degrees c ( fan) but if it is cooked through sooner take it out (or leave it longer if it needs it.) I made the mistake of sticking cocktail sticks into the cake too often to check that it was cooked. This meant I deflated the cake slighty. Also pausing to mess around taking photos of the cake meant that I didn’t invert the cake tin quick enough and to my horror saw the cake sag down inside the tin. You can see on the cooled cake that it has a little ridge around the bottom of the cake (a bit like a muffin top over spilling someone’s jeans). Note to self: check it’s cooked and tip the tin upside down immediately when taking it out of the oven! 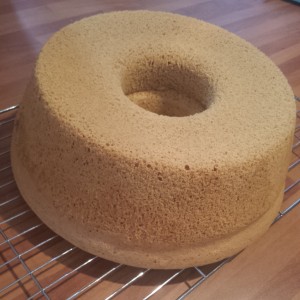 Once the cake cooled completely I found that it didn’t slide out of the tin as easily as I had hoped, as the cake was clinging on a little too tightly to the tin. I coaxed it gently out of the tin using a sharp knife and running it around the edge of the tin, allowing gravity to do the rest of the job. This meant that the cake didn’t have a shiny finish to it, but  I think this is how it’s supposed to look. 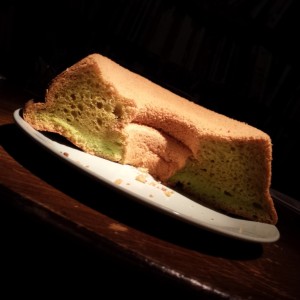 What a magnificent cake the Pandan Chiffon Cake is! It is extremely light and soft to the touch, more like a tasty pillow than a cake. I’ve never eaten a cake that actually melted in my mouth before until now. It’s moist and airy and keeps for at least 3 days after baking it. (That’s as long as I managed to save my final piece until.) It’s worth slicing the cake with the sharpest knife that you have to preserve it’s shape as much as possible as it is very delicate. (I may have been a tad heavy handed when slicing it up as I squished it slightly.) 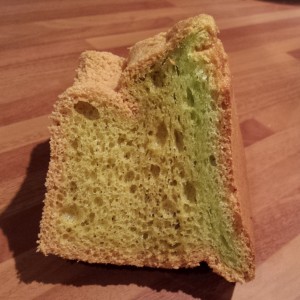 Pandan is an unusual flavour. It perfumes the air whilst managing to taste both sweet and savoury at the same time. It’s similar to Green Tea (Matcha) cakes but like nothing else that I’ve ever tasted before. I will surely be baking this again. It really doesn’t take as long as you might think, perhaps 30 minutes to prepare and as it doesn’t need any dressing up, you don’t need to spend time decorating the cake. Icing would be overkill. It’s a deceptive cake. It looks rather plain and boring from the outside, but that first slice releases the pandan perfume and the glorious green chiffon . It’s a much more complex and interesting cake than you might initially think. If you’re going to attempt an exotic cake I can’t recommend the Pandan Chiffon Cake enough! 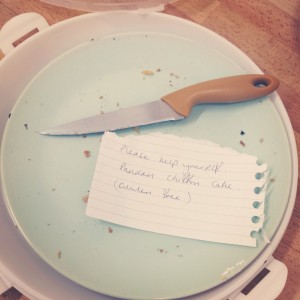 An empty plate speaks for itself! – The Pandan Chiffon Cake disappeared very quickly

Things I used to make my Pandan Chiffon Cake 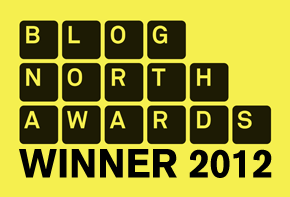