With it being Chocolate Week last week and National Baking Week this week, I thought I should bake something else chocolatey and lovely. A triumphant return to America to one of the few Hummingbird Bakery Recipes that I was still to attempt… Baked Chocolate Cheesecake.

After watching the Baked Cheesecake GBBO episode I was aware of how tricky this would be. But I’m still dreaming about Jo’s Rum and Raisin Cheesecake! I was a little surprised in the supermarket when purchasing all the cream cheese needed for this one… 4 packets of cheese seems like a lot!!

I decided to improvise with the biscuits as I already had rich tea in the house rather than buy digestives. That won’t make too much of a difference right?

I must admit I was in a little bit of a hurry when putting this one together and roughly blended rich tea biscuits and cocoa powder into sweet dust which permeated the entire kitchen with my little hand whisk. An emergency tea towel was required to protect my eyes.

I pressed the biscuity mess into my borrowed loose bottomed tin and shoved it the fridge to set.

I threw all the cheese with the melted chocolate into a bowl and whisked it all up then added all the eggs… Using one hand to smash the eggs and one hand to whisk, i ended up with egg shells all over the floor, but an effective method nonetheless. 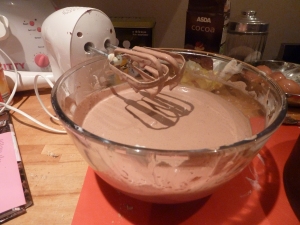 I poured it all into the tin then once again disaster struck. I’m most definitely consistent in one area. My inability to read recipes. Dear Lord, I despair at my own ridiculousness. I realised I hadn’t read to the end of the recipe! I didn’t have a tray big enough to submerge the cake in, in order to bake it in a bath of water. I only had another loose bottomed cake tin which I managed to gently manoeuvre the runny cheesecake into. Upon pouring water into the second tin, I thought I could hear rain. No. It was all the water running out of my cake tin over the electrical items down the back of the kitchen units and onto the floor. BRILLIANT.

I had to abandon the water bath idea and hope that it wouldn’t burn being baking directly in the oven.

Just as I was lifting the precariously full tin unto the oven I had a flash of panic. I’ve forgotten something…. SUGAR! (and also vanilla). How did I forget sugar??!! I was so very lucky to have realised at the very last minute, as this would have been a rather expensive and disgusting cheese and chocolate bake.

not quite oven ready... quick hand me a ladle!!

Quick to rescue yet another failure on my part I grabbed a ladle and scooped the gloopy mixture it of the tin and back into the bowl. A quick whisk of sugar and vanilla and it was time for the oven again.

To compensate for the lack of water I turned the oven down to hopefully prevent burning. From watching GBBO I know the cheesecake has to wobble a bit in the middle, but mine just kept wobbling all over. I probably kept it in the oven a bit too long.

The Double Tin Effect - sadly no water (probably should have stopped baking at this point...)

An hour and a half later I had one massive chocolate cheesecake on my hands, albeit with a huge crack down the middle, it looked ok!

Rather than at this point...

It needed a night in the fridge and then it was ready for tasting. It’s definitely rich and creamy. It’s so filling  you can only eat a little bit in one go, but I quite like it. The Rich Tea base is actually pretty good too! This feeds about 25 people.

But from this angle (and if you squint a little) the disaster disappears! Magic!

I’ve even purchased some take way pots to deliver take away cheesecake to my friends and family this week. If you’re visiting me this week please beware you will be fed cheesecake and then take some home with you too! Its good to share!