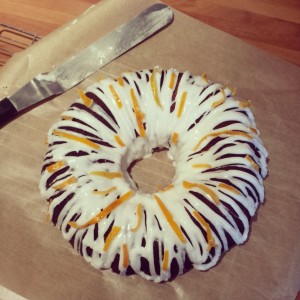 January has been a busy month filled with baking and frustration with the new-to-me-yet-old-to-our-house oven which has no temperature or oven settings remaining on it. Leaving the delicate science of oven temperature in the lap of the gods or in my case the sizzle of the grill.

This month I have successfully 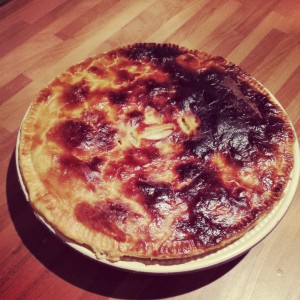 I must admit I considered throwing the fiery beast in the bin, but the bin isn’t quite big enough… so back to patiently burning my cakes and starting over, and over, I went. 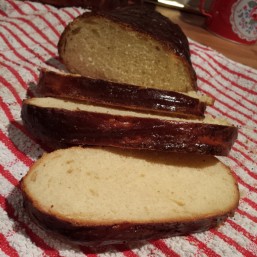 Challah – not so charred on the inside

I guess this oven is a bit like baking with an Aga? (Having never used an Aga I may be making this up) I put my limited Aga knowledge to good use and attempted to control the heat by placing extra baking tins in the oven, to protect my precious cakes from the uncovered elements in the oven and ward off the extra hot spots. Adding tin foil hats to my cakes wherever possible to guard against the scorch. If you have any suggestions on how to bake in a small, yet very hot, electric fan oven please send them my way! 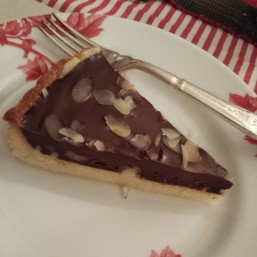 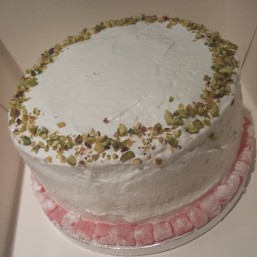 Undeterred I continued and eventually managed to bake some edible and rather lovely cakes, although I had to admit defeat on some of the more delicate bakes. It seems I shall be baking only robust cakes and breads that can withstand the heat until I can get to grips with the animal in my kitchen.

This month I’ve taken the opportunity to recreate some of my most favourite around the world in 80 bakes with a slightly new twist. Mainly that I have crammed as many international elements and Middle Eastern flavours that I could possibly think of into one cake. And the result? My 4 layer Iranian Pistachio Cake with cardamom; home made lemon curd, Turkish Delight and Rose Italian Meringue. Which means I finally conquered the ever elusive Turkish Delight using a very good Rachel Allan recipe. I even treated myself to 2 new cake tins that are the same size! Unheard of in my house, so now I can actually make cakes that sandwich together. Hurrah! I predict there will be many more layered cakes in my future.

I also re imagined my Armenian Gluten Free Orange and Almond Cake into a bundt cake with ribbons of orange blossom icing and home made candied peel. Much less syrupy than my last attempt with thick piped glace icing which gave a great sweet contrast to the slightly bitter orange and almond cake.

Thanks for reading and I hope January is treating you well. I’m looking forward to hopefully baking not burning some new and exciting international recipes very soon.

Am I attempting to elongate my around the world in 80 bakes challenge somewhat or am I just easily distracted? Perhaps I’ve exceeded my capacity for cake. Who knows. But it seems I’m having a dalliance with bread baking at the moment. 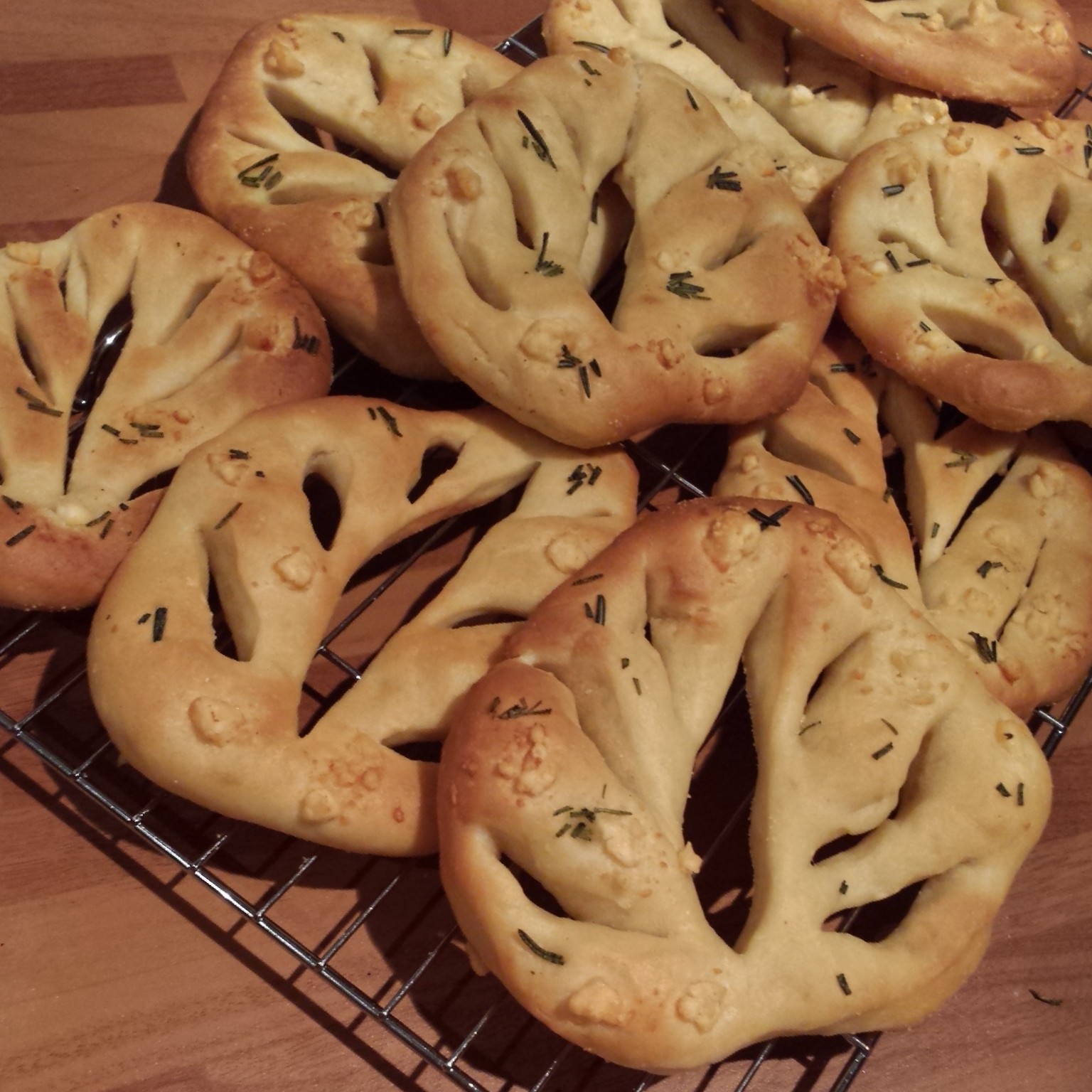 I couldn’t let Fougasse pass by undocumented, as something I’ve baked and forgotten about disappearing into the reams of photo I’ve #justbaked on instagram. I had to tell you about them. I realise I’ve baked rather a lot of French things thus far from Tarte au citron, to baguettes so I’m not counting Fougasse as one of my around the world in 80 bakes. BUT they are deliciously simple, despite their extremely complicated and masterful appearance. I gleefully clapped my hands together upon opening the oven door to reveal perfectly formed bread fronds.

You can flavour Fougasse with any herb that you like.I foraged some rosemary from a sandwich buffet that was only used for decoration for an hour and was binward bound. I couldn’t face such waste so pocketed it for baking, to put it to good use alongside rock salt, shallots and pebbles of pecorino cheese. Future Fougasse that I have planned in my head include, roast pepper and garlic; mint and feta; basil and chilli; chia and sesame seed. I’m also taking advantage of the Rosemary bush we’ve inherited in our new home.

I can’t stress enough how simple a dough it is. It’s a basic white dough that can be adapted to make 2 large fougasse or as I’ve made since, many small palm sized fougasse. An impressive side dish to whip out when friends come for tea which can be frozen and defrosted as required.

Proven and knocked back dough. Kneaded with rosemary and onions

As with most doughs mix the ingredients together to form a sticky dough. Knead for about 10 minutes until smooth. Place in a large bowl, cover with greased cling film and leave to prove for 1 hour until doubled in size.

Roll your dough to a palm leaf sized shape

Once proven, knock the dough back and knead in your chosen flavours. If using rosemary and onions chop them finely first and sautee the onions in a little oil Then divide your dough into 2 equal amounts (if making large fougasse) or 12 pieces (if making mini fougasse). Roll it out on a lightly floured bench to a thin rectangle about 5mm in depth and about 20cm x 25 cm. The onions will make the dough a little sticky and can be a little more tricky to slice through later on. 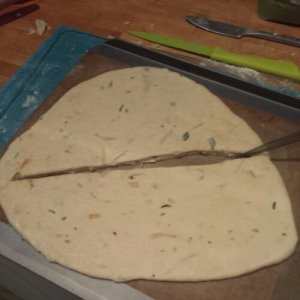 The first cut is the deepest

Then comes the fun bit. Pop your flat dough onto a lined and semolina sprinkled baking sheet. I like using a pizza cutter for my long slashes in the dough. You have to split the dough up the middle, cutting all the way through and gently encourage the dough to separate, so there’s a space (you can see the baking sheet underneath). Make one diagonal cut (1cm in from the edge so there is still some dough attached to hold your fougasse together) from one end of the dough to the other, leaving 1cm at the opposite end untouched. 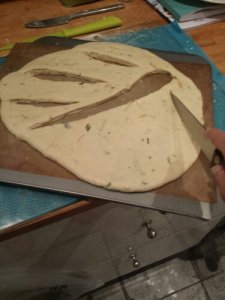 Make 3 diagonal cuts at an angle from your central cut

Then to add the additional detail. Make 3 diagonal cuts, either side of the split, moving your blade back towards you, at an angle from your central cut. If you want to get all technical these cuts are made at about a 45 degree angle. Make sure you leave at least 1cm of dough un cut at either end so that your fougasse doesn’t fall apart. Don’t forget to encourage the cuts to widen, use your fingers and blade if you have to, to make some space. As your dough rises the gaps will disappear and so will your carefully cut design. (As demonstrated beautifully by my first slightly botched attempt below…)

Stud your fougasse with chunks of parmesan and any extra rosemary that you’ve saved for extra flavour. If making mini fougasse, repeat this until you’ve shaped all of your dough. Cover it with greased cling film and leave to prove for 20 minutes until puffed up.

Stud your Fougasse with chunks of parmesan

Bake your Fougasse in a pre heated oven at 220 degrees c for 13 – 15 minutes until golden brown. These are delicious served warm, with a rich tomatoey or pestoey pasta dish, but equally tasty served cool and enjoyed independently as a feast in the palm of your hand. They also freeze very well so you can save some for later, or bake it in advance.

Things I used to make my Flavoursome Fougasse

1. Knead dough together for 10  minutes. Cover and prove for 1 hour.

2. Sautee the onions and garlic in a little oil and allow to cool

3. Chop the sprigs of rosemary finely

4. Knead the onions, garlic and rosemary into the proven dough

5. Divide dough into 2 and roll into rectangles 20x25cm and 5 mm thick

6. Place on semolina sprinkled baking sheet and cut into the dough as described above. Studding with parmesan.

8. Bake at 220 degrees C for 13 -15 minutes until golden brown and the parmesan cheese crisps up slightly.