This is without doubt the most epic bake that I have ever attempted. I’ve eaten Baklava in Greece, Turkey and Morocco. It is divine and very moreish with its honey soaked pastry. It’s one of my favourite sweet treats. I’ve been planning on attempting it for a while but was a bit hesitant to attempt Filo pastry from scratch as every book, including my Greek cookery book, said to buy it ready made pastry!

Undeterred I asked my foodie friends for some advice on Twitter and was very kindly assisted by @bakingelements who sent me a Michel Roux Filo recipe from his ‘Pastry’ book. Thank you so much for your help. Without those photos I couldn’t have done it!!

Filo requires a lot of time and patience. It’s really not for the faint hearted. The dough itself is quite a basic concoction, flour, water, salt mixed in the food processor with a dough hook. Seems simple enough…

Then pour in oil while its mixing and wait until its all combined. 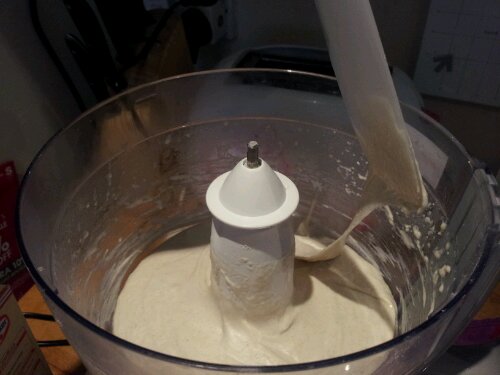 It becomes rather sticky and stringy at this point.

My new food processor was thoroughly christened in sticky dough in the process too… Cotton buds to the rescue!

Then it required about 5 minutes of extra working on a cornfloured board. I had to add a lot of extra flour as it was SO incredibly sticky

When it was worked sufficiently I measured it precisely (can you believe it? With scales and everything!) into 60g chunks. They had to rest in a cool place for 2hours on a floured tray covered in cling film so it didn’t dry out. 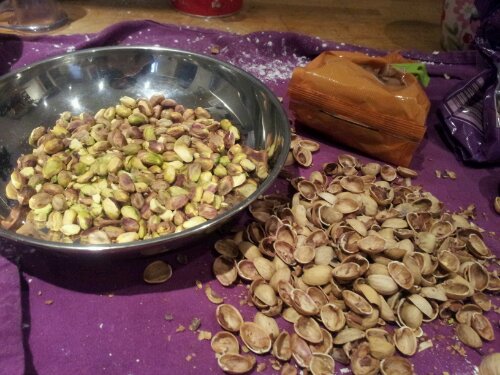 Pain in the pistachios

This gave me enough time to de shell and husk a whole bag of pistachio nuts. (Note to self. Please buy nuts without their shells in the future.) This is 45minutes of my life I will never, EVER get back. I broke a couple of nails and showered the kitchen in shells when in desperation I smashed the nuts with the stick bit of the pestle and mortar. Not to mention the nips and cuts the little blighters gave me. 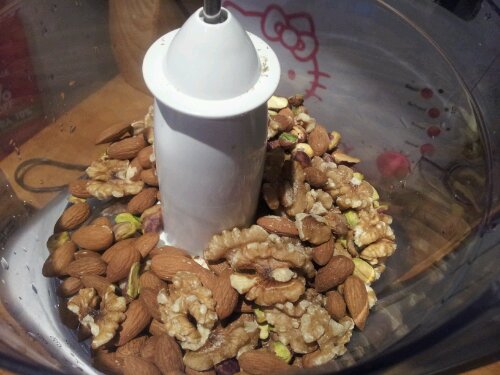 Into the food processor 1lb of mixed nuts I threw, the damn pistachios, whole almonds and walnuts. A quick whizz to chop them up and I added sugar, cloves, cinnamon and some pre chopped almonds.

To help speed up the chilling process I popped the pastry into the fridge for a bit whilst prepping the pastry board and a vast supply of cornflour.

Now for the tricky and even more time consuming bit. Michel Roux had sensibly instructed me to prepare 60g balls of dough so I had manageable chunks to roll out. However I was also working with 2 separate Baklava recipes which suggested working with a round cake tin and a rectangular tray. Whilst trying to stretch this delicate pastry out I realised there was no way on earth I was ever going to get it to the length and width needed to fit such a long tray and of course roll it to the required 0.5mm thinness!!

Still a bit too thick...

I decided to use a smaller square tin and ad lib from all 3 recipes that I was following. I greased and lined the tin in preparation.

The first piece of rolling was lovely, dusting it with flour and gently rolling it out. I can’t believe I actually thought ‘brilliant this is going to be fun’. I lost count of how many sheets of Filo I rolled but as soon as you kind of get it to the right size and try to pick it up, it stretches, so its too big for the tin! Then it tears! And somehow your supposed to brush it with butter evenly too whilst it crinkles up and become more of a patchwork quilt. I had to trim bit here and there and add extra bits to cover the holes but I got there in the end.

The first fantastically even and smooth layer. Look it reaches the edges (almost)!

I realised that 60g was too much per layer so had to divide each chunk into 4 to get the right thinness and to ensure I had enough layers to go round. I have feeling you’re supposed to let the pastry rest after rolling it but I didn’t have the time. I also had to stretch each piece to fit inside the tin so it was really practicable either.

The actual amount of dough per layer pre rolling

I also missed the step in the recipe that said you’re supposed to start with 8 layers of pastry on the bottom before you add any layers of nuts and sugar. I had 2 bottom layers and there was no going back. I was in Baklava lasagna mania and only had 2 hours to finish the whole thing. 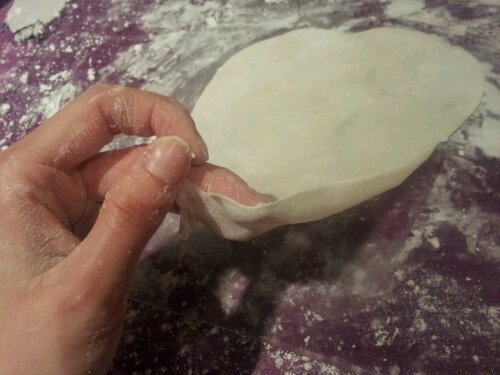 I’m not sure how much butter I used but I had to refill the pan 3 times along the way.

My theory was 2 layers of pastry then a layer of nuts. I attempted to butter both sides of the Filo that was to sit on top of the nuts, which is probably totally unnecessary but the paranoia of dry Filo was setting in. Each time I added a layer I had to cover the pan in cling film too to stop it drying out too.

The top layer with 8 layers of Filo and a generous butter coating!!

Precarious cutting through many layers.

I popped it in the fridge (but forgot the cling film!!) then set about simmering the syrup of honey, lemon juice, sugar, water and cinnamon. I added some rose water too.

The Baklava needed 35mins of baking while the pan simmered. I almost burnt the syrup as I wanted to reduce it further and salvaged it by dunking the hot pan into cold water to stop it cooking.

Once the Baklava was crisp and golden it was ready to be drown in thick syrup. 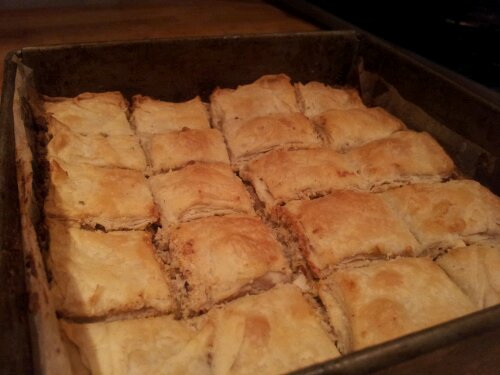 I added a garnish of chopped nuts (I still have a bag left over so probably wouldn’t make as much next time) and some more syrup to top it off. Apparently it needs 4 hours to cool so I wrapped it in a towel and carried it to my friends house for our pudding. It definitely didn’t last long enough to cool for 4 hours!!

I was hoping after all the time and effort it would be ok and it really really was. The syrup soaked into every layer making a gorgeously sticky delight! Even with less pastry on the bottom it held together and cooked all the way through! 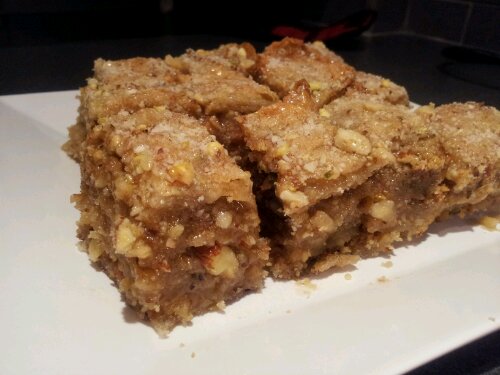 Piles and piles of Baklava

I’m happy with my Filo experiment. I generally hate making pastry and this almost killed me. There was a lot of energy spent in making this so I don’t feel guilty in the slightest that I ate 2 massive pieces in one go. It did take an entire day to make but what an achievement! Now I’ve made Filo once I know I can do it but perhaps I might buy some ready made if I was going to attempt it again.

I’m now going for a lie down 🙂

<a href=”http://www.bloglovin.com/blog/3326777/around-the-world-in-eighty-bakes?claim=mngmk6jv65c”>Follow my blog with Bloglovin</a>