Shortbread is traditionally Scottish and delicious so what better way to bring it to life than with a generous coating of caramel and chocolate? 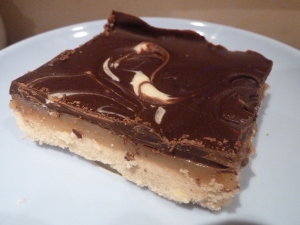 I’ve been to Scotland many, many times and love it. Who else has a shop dedicated to Chocolate Soup?

I’ve made biscuits before but not like this and never Shortbread. After my mam kindly donated a tin of what we thought was caramel I craved Millionaire Shortbread for a week so I dug out a Shortbread recipe and set to work.

It seems strange that Shortbread only consists of sugar, butter and flour. I had to keep checking the recipe to make sure I hadn’t missed something. Where’s the eggs?! Surely this won’t work?

I treat myself once more to another new piece of baking equipment. This time to a very big and deep tray. Perfect for a traybake like this. The can of caramel had a recipe for Millionaire Shortbread printed on it which said to break up Shortbread then squash it into the tin. I was about to bake loads of biscuits then crush them up but realised this was ridiculous. I could simply bake a layer of Shortbread and layer the caramel and chocolate on to it, making one big tray instead. Genius. 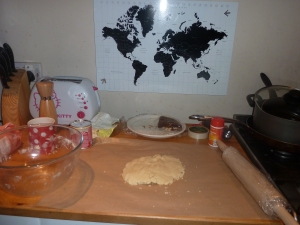 I quickly whipped up a batch of Shortbread and attempted to roll it out directly onto a sheet of greaseproof paper in an attempt to minimise mess and washing up! Another innovation, although I had to weigh the paper down with various kitchen implements.

Upon rolling the dough it became apparent that we were going to be dining on pauper Shortbread if I had to eek out the dough to fill the entire tray. It would have been a sorry sight to serve up wafer thin Shortbread.

Squished into all the corners

I ended up making another batch and combined the two doughs. A quick roll to flatten it out. Then all I had to do was lift the entire baking sheet into the tray and press the dough into the corners. Minimal effort required!

A quick bake in the oven for the Shortbread and whilst it was cooling in the oven I opened the can of caramel, only to discover that the price label had cleverly concealed its true contents. It was in fact a can of condensed milk! I thought my plan was scuppered but I rooted around in the fridge for some spare butter and sugar. I had enough to turn this can into a wonderful pan of caramel!

I hadn’t attempted caramel before, although I have made Dolche De Leche by simmering a closed can of condensed milk in a pan for a couple of hours. I assumed caramel couldn’t be that different and threw myself into the caramel creation with some gusto. Yet with some caution, following my previous burnt pan messes which have killed off a few of my pans. I didn’t want to have to buy any more pans! 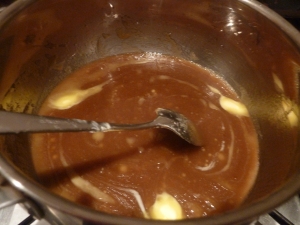 I was surprised by how relatively easy this was. I didn’t burn then pan or set fire to anything. Success!

Once the next layer of caramel was added to the shortbread it needed to set in the fridge for a while. I left it to cool and threw 3 bars of plain chocolate into a glass bowl over a pan of boiling water to melt. 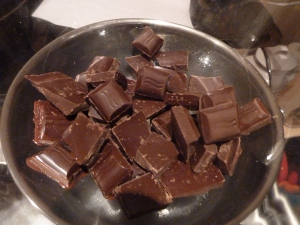 This meant just before bed all I had to do was spread the thick chocolate onto the caramel, and leave it to set in the fridge once more.

I discovered a little white chocolate lurking in the fridge too and thought it would be nice to make a swirly pattern on the top with it. So I threw it into a sandwich bag and left it in the hot water to melt. 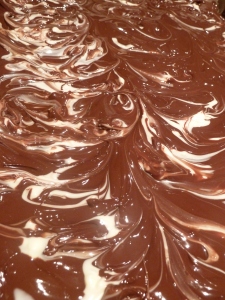 A quick snip with the scissors and I have a handy disposable piping bag (thanks for the tip mam!) and less washing up for me. I swirled it up with a knife and it looked rather pretty, even if I do say so myself!

Look at that thick chocolate!!

The hardest bit of this bake was trying to cut it up into equal pieces without the chocolate cracking in all the wrong places. My hands were a bit sore pressing the knife into the chocolate! Perhaps a sharper knife would help? 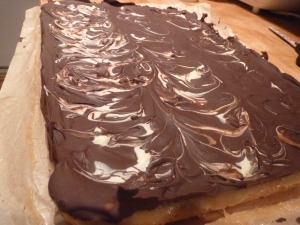 It was very well received at home and at work. It is genuinely the bake that just keeps going. I must have cut it up into about 35 pieces!  I’ve enjoyed a bit everyday with a massive cup of tea. I predict I will be making this again in the future…

Things that I used to make Millionaire’s Shortbread