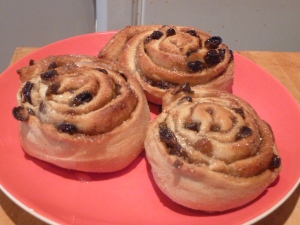 I truly love cinnamon. When faced with the cake selection in Greggs I normally opt for a massive Belgian Bun the size of my face, oozing with icing and raisins. I’m not entirely sure what I can call this bake or which country I can say it’s from as, surprise, surprise, I made it up a bit. It started life as a Chelsea Bun recipe from the lovely Marguerite Patten, however I’m not keen on candied mixed peel and it had a distinct lack of cinnamon.

The bun is based on a sweet bread recipe and needs some time to prove and unfortunately some planning in advance.  I mixed and kneaded this dough rather late one night and then let it prove overnight in the fridge to slow the yeast development a little and I wasn’t too sure about keeping dough enriched with egg at room temperatute overnight. (Don’t want to poison anyone..) Although Marguerite didn’t seem to say anything about leaving it over night, I don’t think it did it any harm 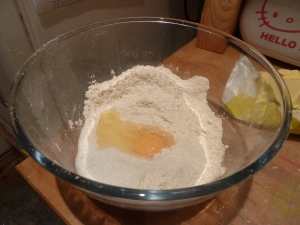 Just the one egg

Drizzle in some milk

The next morning was thankfully a Saturday and I had time to play in the kitchen. So out with the pastry board, cling film and rolling pin! I rolled out the dough onto a long piece of cling film, as far as it would stretch. I definitely need more practice with a rolling pin as this tapered effort was definitely not the desired shape or size of the flattened dough. 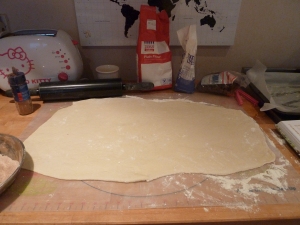 I couldn’t possibly tell you how much sugar and cinnamon I threw onto the dough. (I really should pay more attention in the kitchen) I was liberal to say the least. I guessed the amount based on how brown the sugar turned and then added some more spice for good luck. Once the entire flatten dough was coated without any gaps in the cinnamon brown spicy sugar I figured I had reached the perfect sugary point. 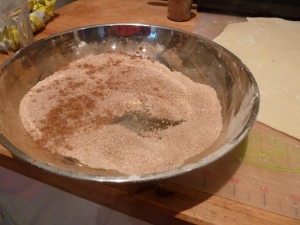 Then the exciting bit! To roll it all up without putting a hole in the dough. as an added precaution I brushed a little melted butter on the inside edge to help it stick before rolling it and on the final edge too. I fought with the dough carefully lifting it up with the cling film then turning the edge over tightly. The cling film had to be peeled away carefully, it wouldn’t be a very tasty accompaniment to the roll whilst juggling the pliable dough. The raisins needed a lot of attention as they were falling all over the place and dangerously poking through the dough. Patience is the key here and a gentle hand to guide the dough into a swirly log. If only I could get my roulade to roll as tightly as this…

Wielding a very sharp knife I sliced the log into sections and placed on a greased and lined baking sheet to prove a little more whilst I washed all the sugar out of my hair. 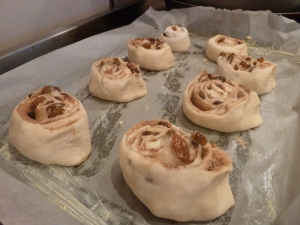 I’m not so sure Paul Hollywood would approve of my consistency in shape and size in this batch, but they tasted great and it meant I could eat 3 little ones instead of one enormous one. 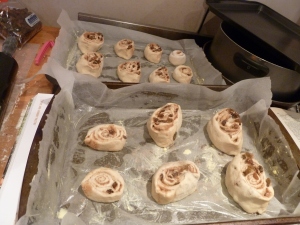 *some teeny weeny rolls on here*

After a quick bake in the oven, Heaven had arrived! (I don’t use that term lightly either!) I’m considering making this for a perfectly indulgent Christmas morning breakfast, to permeate the house with cinnamon and loveliness! It was hard to wait for the them to cool down before devouring them! They just needed a simple icing sugar glaze, which I made in a pan and drizzled over while they sat on ther cooling rack.

Then I piled them high on my plate and made a pot of tea and ate 3 in one go in front of the TV. Whatever they’re called they were divine and needless to say they didn’t last long in our house, especially when they were still warm out of the oven…. I’ve got to go, must bake some more. 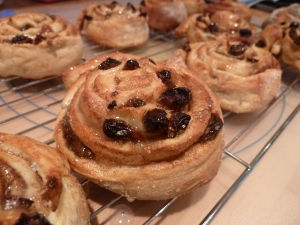 Things that I used to make the Chelsea/Belgian/Cinnamon Buns

Marguerite uses a simple honey glaze, brushed over the warm buns but I made a sugar glaze with